Ybor City holds a unique place in Florida’s social and economical history as our state’s “first industrial town.” The founding of this community in 1886 was based on what turned out to be a very shrewd “business decision” by Don Vicente Martinez-Ybor to move his cigar factory from Key West to Tampa. This was at a time when points south were literally “Indian Territory.” 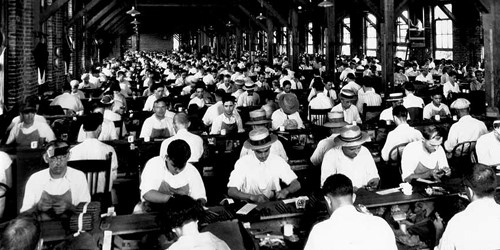 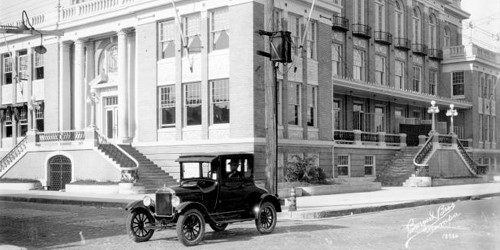 Tampa’s city elders offered low-cost land, “the incentive of the day,” to Don Vicente. He built his factory, which was at that time, the largest brick structure in Florida. Other cigar-makers followed, building their own factories. Immigrants from Spain, Cuba and Sicily came to work in them and Romanian merchants opened stores to serve the community. As the industry matured, German lithographers brought the latest in printing and engraving technology to Ybor and a whole new commercial art form, the cigar label, was born.

Ybor city is not only a great example of turn-of-the-century capitalism, but also of organized labor – and this in what has always been a “right to work” state. The Labor Temple was an integral part of the industrial infrastructure. This moderate form of collectivism was not limited to just work, but formed the basis for the social clubs that offer mutual aide and a rich social life.

Ybor’s social clubs provided “cradle to grave healthcare” at a time when the HMO was not even on the drawing board. These mutual aid societies provide a home base for each ethnic group and with their cantinas, theatres and ballrooms, a range of social activities that were more sophisticated than the general environment.

Rather than trap the workers “beholden to the company store,” Ybor and many of his fellow entrepreneurs encouraged cigar rollers to own their own casitas or “little houses.” This allowed skilled, hard-working people to build equity in their homes and gave them a growing piece of the “American Dream.” The children and grandchildren of these Tampanians are successful professionals, business owners and community leaders.

What is so fascinating about Ybor City is that the buildings and architecture are still here and tell a story. The sturdy cigar factories, elegant social clubs, quaint casitas and balconied storefronts are preserved and in productive use today – giving another generation “roots and wings.” Why even the “art of the label” foreshadowed Ybor City’s modern roll as a center for high-tech creativity.

You can experience the early history of Ybor City yourself at the Ybor City Museum State Park.

Historic images provide the backdrop for the song, “Ybor City”, which was written, recorded, and produced by Miguel Baluja.

This version features the dynamic vocals of Tony Garcia. Both, Baluja and Garcia, are natives of Tampa, with roots deeply ingrained in Ybor City.

The video was put together using the Burgert Brothers Photographic Collection. The images have been digitally archived and are considered to be in the public domain: “Courtesy, Tampa-Hillsborough County Public Library System.” All color photos belong to Miguel Baluja. Copyright 2007 Lemon Drop Studio, All Rights Reserved.